Hydrogen technology plays a key role in the energy transition. It makes it possible to store and transport energy so that it can be used anywhere.

The North American Council for Freight Efficiency has unofficially introduced the color scheme below for each source of hydrogen production. No matter what the color, Bilfinger Tebodin is here to assist you.

If produced with renewable energy, the resulting “green hydrogen” can act as fully carbon-neutral fuel source.

Our team has a wide range of experience with hydrogen at the industrial level (blue and gray hydrogen). We can also assist you with high-level expertise when it comes to alternative sources of energy. This makes Bilfinger Tebodin an expert partner for green hydrogen projects, perfectly combining all the available advantages for our clients.

The experts at Bilfinger Tebodin — our consultants and engineers — are a huge asset for projects related to the production, storage, transportation, and utilization of hydrogen. We consider every step in the entire hydrogen value chain in order to deliver the most efficient solution for your particular case.

We are supporting our customers in the very first stages of their projects, from the Site, Master and Spatial Planning to the business case development and feasibility study. This support continues throughout the project with conceptual and basic design, detailed design and a complete EPCM approach. In addition to all these engineering steps, our consultants can also assist our clients with authority engineering — the “paperwork” elements, like permits and the environmental impact assessment — industrial emissions, the technical and safety-related matters (e.g. HAZOP, HAZID, ATEX, SIL, CE marking, etc.), and HSE management.

To make the energy system and industry more sustainable, CO2-free gases such as green hydrogen are needed in addition to large amounts of renewable energy. Therefore, our long-term client Gasunie is planning to build an underground hydrogen storage facility near Zuidwending in the Netherlands, called the HyStock project, to offset any future imbalance in supply and demand for hydrogen in the BackBone.

The underground storage requires an above ground installation that injects hydrogen from the BackBone with compressors into the caverns and vice versa. This installation will be an important part of the hydrogen infrastructure in the Netherlands. Bilfinger Tebodin will execute the Basic Engineering for this unique installation.

The North Sea plays an important role in the production of renewable energy. Not only is it a possible location for offshore wind farms and underground CO2 storage sites, it could also be an excellent place to produce hydrogen. The North Sea Energy Program was established in 2017 to determine the potential of the North Sea as an integrated energy system. Bilfinger is one of the more than 30 organizations, companies, and research institutes that are collaborating on this program. As part of the program, Bilfinger Tebodin has designed six hydrogen production plants of different sizes for a total of three “energy islands” that produce 2, 5, and 20 GW (gigawatts) respectively.

Bilfinger conducted a pre-feasibility study on the production of hydrogen for a Slovakian company NAFTA. Technical and economic study has been made to simulate hydrogen fed into natural gas pipelines and stored underground, allowing a hydrogen feed-in to natural gas. Within the feasibility study, a team of consultants and technical experts from Bilfinger Tebodin has provided:

The feasibility study was aimed to make the project ready for both internal and external funding, and further development.

The attention for green hydrogen is increasing significantly due to current climate objectives. For example, it can serve as a carrier for wind energy when electrolysis is used. Along with the potential end users, the Port of Rotterdam Authority is planning to build a 1GW electrolysis conversion park on the Tweede Maasvlakte. The hydrogen produced will be transported to the industrial sector and other users via a pipeline. Bilfinger Tebodin and Witteveen+Bos conducted a hydrogen-compression system analysis and a techno-economic analysis of different configurations for this project.

Click here to read our blog called 'Hydrogen: possible applications and the future'. 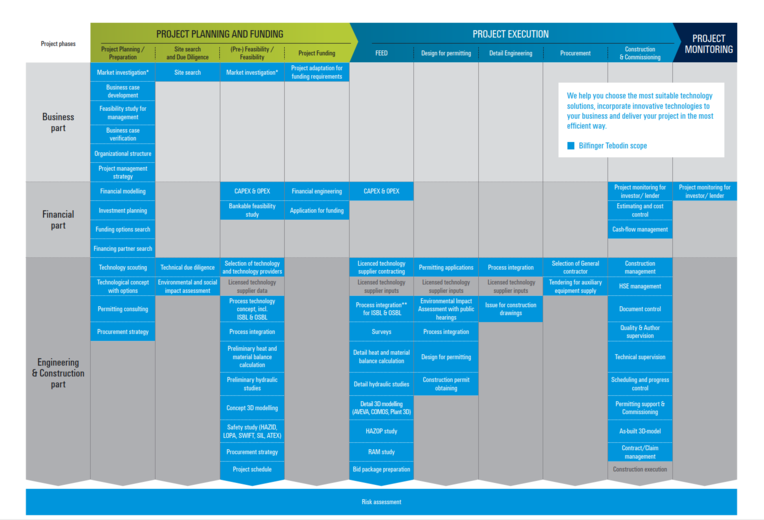 Discover a broader range of Bilfinger capabilities in hydrogen