Recently, Huntsman Holland has modernized the automation of the Methylene diphenyl diisocyanate (MDI) plant in Botlek Rotterdam. During the plant shutdown in April, a completely new operating system has been implemented. This project has been prepared and successfully executed within fourteen months.

’That is special in the chemical market, because these projects are large-scale and complicated and so require a long preparation time to solve the various challenges along the way,’ says Taco Boerstra of Tebodin (part of Bilfinger Group), who, together with the supplier of the automation system, Emerson Process Management, led the migration.

Cooperation
Most important success factors for the short turnaround time and the problem-free migration are a clear vision and the cooperation between supplier, consultants, users, client and other relevant partners. All the knowledge required has been gathered at an early stage. Tebodin facilitated this intense cooperation. Max van der Meer, General Director of Huntsman, confirms the speed and success of the migration: 'We constantly work on the reliability and safety of the plant and with this new system, we are more secure. The preparation and implementation of this project have a huge impact on the organization and we have taken advantage of the services of Tebodin and Emerson.’

Simulation training
For the migration of the existing operating system to a new DeltaV™ DCS platform by Emerson, special attention was paid to the use of the system. Constantijn Tsiris of Emerson Process Management: ’The startup phase after the maintenance shutdown is always an exciting phase. The current possibility to train operators beforehand with a dynamic simulation of the plant has contributed to a safe and efficient start up.’ 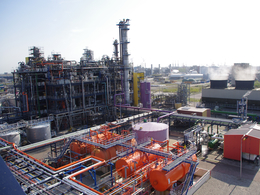