Recently, BioValGroup (BVG) and Tebodin, part of Bilfinger Group, have signed a contract for the provision of engineering services to a semi-commercial demonstration plant, in which biomass residual streams will produce cleaner fuels for the energy sector and high-grade fertilizer.

Cleaner at a lower cost

BVG makes it possible to upgrade low-value biomass residual streams to clean, uniform energy pellets. Compared to wood pellets, the product is cleaner because the mineral level is minimized and can be produced at a lower cost price. George van Bommel, General Director of BioValGroup: ’This delivers potential for large-scale application in the energy sector, where contaminants in the fuel wood are currently causing maintenance problems.’ As a by-product, high-grade fertilizer will be produced. This demonstration plant will operate on a semi-commercial basis, functioning as a center of expertise and testing the technology of various biomass residual streams for future clients.

Tebodin assists BVG in the realization of the project and identifies opportunities for upscaling to a fully functioning plant and therefore became involved in the project as a partner. ’The partnership with BVG fits the growth strategy of Tebodin in the biobased economy,’ says Taco Boerstra, Director Chemicals at Tebodin. BVG consciously chose Tebodin because of their knowledge in the field of biochemistry, their active role in the biobased economy, and their wide multidisciplinary knowledge. The plant is expected to be completed in Amsterdam early 2016.

BioVal Group VOF is a cooperation of BioTorTech BV and the INB Group. BioTorTech BV has developed the technology for the valorization of biomass residual streams at the Green Chemistry Campus, at Sabic IP laboratories in Bergen op Zoom, the Netherlands.

The INB Group is a project developer, bringing biobased technologies to the market. 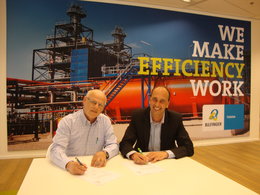