As part of its expansion policy in Saudi Arabia, AFIA International Company decided to expand its operation facility inside the Jeddah port. Tebodin in Saudi Arabia has been awarded an engineering contract for this major extension. Besides the large tank farm, boilers and an administration block are also part of the project.

AFIA International Company, part of the Foods sector within Savola Group, is the market leader in the production of various edible oils in Saudi Arabia.

Tebodin will be responsible for all designs which consist of the complete architectural design, civil/structural, piping, fire fighting, and electrical designs as well as the tender management coordination. Mr. Haytham El Rez, Tebodin’s Country Director Saudi Arabia: ‘This project is of great importance to us, boosting our position in the Saudi market. We are a young company and this project will allow us to secure a higher exposure for the Jeddah Islamic port projects, in addition to the future expansions of AFIA.’

The Savola Group was established in 1979, with the objective of manufacturing and marketing edible oil and vegetable ghee in Saudi Arabia. Now it is one of the most successful and fastest growing multinational companies in the Gulf and the Middle East region, North Africa and Turkey. It has a wide portfolio of businesses and activities including Edible Oils, Vegetable Ghee, Sugar, Pasta and Retail (Hypermarkets, Supermarkets and convenience stores). 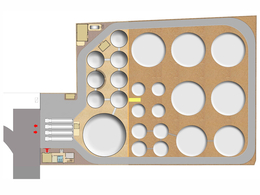