News release: Tebodin worked on over 300 automotive projects in Central and Eastern Europe

In recent two years Tebodin has worked on over 300 projects in the automotive industry for more than 100 clients in Central and Eastern Europe. The consulting and engineering company, serving a large number of investors in this industry, reached about 25% of its turnover in the Central European automotive sector in 2014 and 2015.

The automotive sector plays an important role in the Central and Eastern European economy. Key automotive producers and car parts suppliers are especially concentrated in the Czech Republic and Slovakia. These countries are exporting the largest numbers of vehicles per capita. Other countries – like Hungary, Poland, Romania, and Slovenia – also show a high car production volume. There are in total 33 car plants in these countries, manufacturing engines, personal cars, commercial vehicles and buses.
In Russia, the automotive industry is redeveloping, increasingly collaborating with established global vehicle manufacturers.

Jaromir Kříž, Tebodin’s area director Central and Eastern Europe: ‘The automotive market in our region is developing continuously. With our broad experience in this sector, we are able to guide clients in finding the best solutions including property consultancy, energy savings and waste water. Our ambition is to increase our involvement in planning and optimizing production technology as well as optimization of facility planning with a cost oriented lean approach’.

Tebodin worked on a new factory for windscreen wipers arms and blades for Federal Mogul in Romania and is working on a new plant – with a total production capacity of 150,000 cars/year - for Haval Motor Manufacturing Rus LLC in Russia. Recently, the new Bridgestone tire plant in Russia was official opened, for which Tebodin executed engineering, procurement and construction management services. Other clients Tebodin has worked for are Gestamp in Poland, Czech Republic, and Slovakia, Cromodora Wheels in Czech Republic, and Skoda Auto in Russia and Czech Republic.

In Central and Eastern Europe, Tebodin is one of the largest consulting and engineering companies with 800 employees and a network of 18 offices in 7 countries. 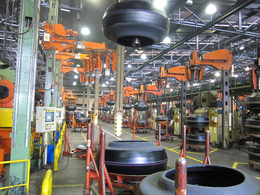