As a result of developments in the gas sector, the production capacity of the Gasunie nitrogen facility in the north of the Netherlands will have to be increased tenfold. On May 9, 2016 Gasunie awarded Tebodin the Front-End Engineering Design project for the required extensions as part of the framework agreement with Gasunie.

New demands
Gas extraction from the gas field in the Dutch province of Groningen will have to be reduced over the coming years. Consequently, more natural gas will have to be imported. This imported gas has a higher caloric value and needs to be treated by adding nitrogen, extracted from the ambient air. The nitrogen makes this gas less flammable and suitable for the equipment and utilities in the Netherlands.
To meet the increasing demand, production capacity at the Gasunie nitrogen facility at Zuidbroek will be multiplied by ten. The nitrogen can be mixed in directly or stored in a former underground salt cavern near Heiligerlee.

The extension of the Zuidbroek gas blending facility will as well support a national transition from today’s use of low-calorific gas towards high calorific gas in the future.

Taskforce
Tebodin will provide the Front-End Engineering Design for the new blending station, connections to the existing installation, gas mains and nitrogen pipes, and a new slug catcher. This substantial project will be executed with a taskforce on location in Hengelo, and provides prospects for further projects, such as detail design. Tebodin has worked with Gasunie before, and this FEED project falls under the framework agreement signed in March 2015.

Vital source
Gasunie is a European gas infrastructure company, providing the transport of natural gas and green gas to industrial and domestic markets, mainly in the Netherlands and Germany. Gas is an important source of energy in North-West Europe. To get the gas to the end-user safely and reliably, Gasunie maintains a high-grade gas transmission grid.

Wim van den Brink
w.vandenbrink*Please remove text between *, this is a spam protection*@tebodin.com
+31651618399 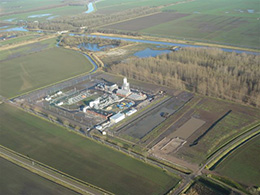