'In the Czech Republic, we invest either in roads, or not at all. I believe this will change soon' - Jaromir Kriz speaking openly about the Czech market

Bilfinger Tebodin's Director for Central and Eastern Europe, Jaromir Kriz, speaks openly about the investment crisis in the Czech Republic, why the country has not been hit by the recent big wave of investment and how the environment and projects have changed over the past twenty years. The interview was held by AFI.

First, the fundamental difference is in the size of the projects. In the beginning, the projects were huge, today they are much smaller, the decline is noticeable. In addition, we have grown competition, which is healthy and allowed all players to move qualitatively further to a level fully comparable to abroad, which was not the case in the 90s. Last but not least, twenty years ago, the process was different. First it was designed and then the contractor was chosen, while today the most common are simple constructions, such as the boxes we see along the highways. The environment of development projects has started in full swing.

How do they work?

A common model is that a development company speculatively or, to say turnkey, builds a production hall. The client then rents it from them, repays it and finally, after a certain time, he can buy it. I would not like to embark on a debate as to which model is more advantageous, whether the engineering or EPCM approach, or the development approach, because both have their advantages and disadvantages. For example, for risky investments, renting for a certain period of time makes sense. In any case, we do not have development projects in our portfolio.'

Read the full interview by clicking on the image below! 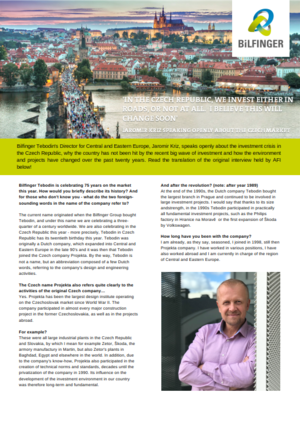