H-vision: major steps in CO₂ reduction for Rotterdam’s industry thanks to a hydrogen plant

Various leading companies in the Rotterdam port area in the Netherlands are working with H-vision to make a concrete plan in order to substantially reduce regional CO2 emissions by using a hydrogen plant. Alice Krekt, Program Director Deltalinqs Climate Program: “We can address almost 20 percent of Rotterdam's industrial challenge for 2030. That's a lot for one project!”

The companies in the Rotterdam port area, just like other industrial companies, have to work hard to decarbonize. The nation-wide task for the industry is to reduce CO2 emissions by 19.4 million tons in 2030 compared to 1990. The government does not dictate how this should be done, so various companies, including Shell, ExxonMobil, Gasunie, AirLiquide, and BP (see box), along with Deltalinqs, put their heads together. Krekt: “We developed H-vision together: a plan for a hydrogen plant that produces blue hydrogen mainly from refinery gases from the involved refineries in the Rotterdam port area. The blue hydrogen that is produced is then used by these companies themselves to generate the high temperatures required for industrial processes.” She clarifies: “This is currently done with natural gas and is not possible with electricity.” The CO2 released during production is captured and stored.

The plan includes the construction of two factories. “The first plant (750 MW) could be completed in 2026 and yield a CO2 reduction of 0.9 million tons. By the time the second plant is up and running, the total reduction in CO2 emissions will have increased to 2.7 million tons. That is almost 20 percent of Rotterdam's industrial challenge for 2030. That's quite a lot for one project.”

This sounds positive. But wouldn't it be even better to set up a plant directly that produces green hydrogen? Then no more CO2 would be emitted at all (see box). Krekt explains that H-vision is opting for a pragmatic solution with a blue hydrogen plant. “For the time being, the participating refineries are still processing crude oil, with refinery gases as a residual product. Moreover, the production of green hydrogen is much more expensive and requires green energy, and there's not enough available at the moment. However, this project paves the way for the production of green hydrogen. The infrastructure being built for this plant can also be used for green hydrogen. Furthermore, an additional purification module allows us to increase the purity of the blue hydrogen. We can supply this purer hydrogen to third parties in order to fill hydrogen shortages.”

The H-vision plan is in an advanced stage. “We have a clear picture of the entire process, and we now have a preferred location: the Shell site in Pernis.” So what’s the hold-up at the moment? “The government has to provide clarity by making choices of their own. Legislation is needed for the transportation of hydrogen and safety standards. In addition, we want to discuss the financing of the factory with the government. The concept is still too expensive if you compare it to the current method for generating high temperatures.”

In Europe, hydrogen is seen as one of the most important solutions to becoming CO2 neutral. Germany and France are heavily committed to hydrogen in their economic recovery policies. In the Netherlands, no clear decision has been made yet. Is the Netherlands missing the boat? Krekt: “In the Netherlands, it is clear that hydrogen is a very important molecule that you can do a lot with (see box). And because substantial investments are being made in solar and wind energy, we will soon need a lot of it to be able to store the surplus of green energy. At the same time, so far, there has been a lot of talk and little action. We're not too late, but we have to work with urgency now. During the coronavirus crisis, we saw how well the government can get things done. There was a support package for businesses in one weekend. We need that decisiveness now.”

She concludes: “Now is no longer the time to discuss solutions; rather, we should move towards a green economy and the implementation thereof. My call to the government? Just start!”

Hydrogen is special because it can be deployed in many ways. It is a raw material (for example, for the production of fertilizer), a fuel, and you can use it as an energy carrier for solar and wind energy. The H-vision consortium wants to use the blue hydrogen that is produced as fuel to generate the high temperatures needed for a part of the production process. Green fuel is purer than blue hydrogen - 100 percent versus 95 percent - and is a good solution for long-distance transport. The use of electricity is not yet a solution to this problem. 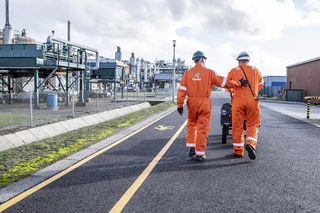 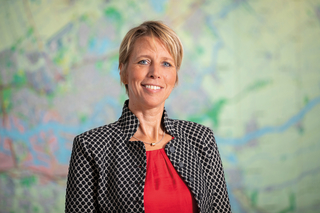