Power-to-X: A Linking Ingredient for the Energy Transition

Renewable energy plays a pivotal role in the energy transition, a long-term structural change in the energy systems toward reaching net zero emissions by 2050.

According to the International Renewable Energy Agency (IRENA), two thirds of total energy supply by 2050 will need to come from renewable sources – the ones that are naturally replenished within a human lifespan, including carbon neutral sources like sunlight, wind, rain, tides, waves, and geothermal heat. While the carbon neutrality of biomass is being debated, it is often included on that list too.

Rapid development of renewable energy systems has defied the core assumptions about the traditional generation capacity, i.e., its year-round availability and possibility to adjust power output on demand – or so-called dispatchable energy generation. Hydroelectricity, currently accounting for the largest, 43% share of the global renewable generation capacity, and biomass are controllable sources of energy and geothermal power is relatively stable. By contrast, the drivers of renewable technologies’ growth with notably decreasing costs – solar photovoltaic and wind power systems – are obviously dependent on the shining sun and the blowing wind. Solar and wind power represent variable renewable energy (VRE), or intermittent renewable energy sources.

Effective integration of high shares of VRE into power systems is both an important challenge and a prerequisite for the success of the energy transformation. And here is when the concept of Power-to-X (PtX, P2X) comes into play.

Power-to-X can be defined as an umbrella term for a variety of options to convert surplus electricity in energy systems with high shares of VRE sources. The high share is generally understood as more than 30% of the electricity mix as it has been shown that, above this threshold, the problem of integrating fluctuating electricity supply into the grid becomes highly acute.

In particular, this sets completely new requirements to the system’s flexibility, which in dispatchable generation used to come from the supply side and now needs to be ensured by grid, demand-side and system-wide energy storage solutions. Power-to-X has recently been identified by IRENA, along with utility-scale battery solutions, as the key enabler of flexibility across the entire system – providing storage of the generation surplus on the supply side, smart electrification of end-use sectors on the demand side and alleviating network congestion adding to grid flexibility.

An interesting semantical twist on the Power-to-X definition is ‘electrons-to-molecules’ reflecting the conversion of green electrons into storable molecular energy.

It is argued that the term Power-to-X was coined in Germany. The country remains one of the driving forces behind the development of Power-to-X. Remarkable is Germany’s Power-to-X Allianz (Power-to-X Alliance), a cross-sector initiative ‘focusing on innovative and climate-neutral technologies and solutions based on green hydrogen’.

While Power-to-X has become a buzzword recently, the concept is rooted in the 1970s when attention in hydrogen solutions was propelled by oil price spikes and growing environmental concerns and the vision of hydrogen economy was introduced. This interest re-surged in the 2010s notably in Germany and is also spreading to other geographies.

Indeed, hydrogen is at the core of the Power-to-X concept. With its ability to form energy rich bonds and the lightest weight, atomic hydrogen (an isolated hydrogen atom) is considered the optimal element for energy carriers. Hydrogen and hydrogen-based synthetic fuels are capable of economically storing vast volumes of energy. And when used for other applications, green hydrogen can present viable solutions to decarbonize hard-to-abate sectors, such as heavy industry and heavy-duty transport.

Green hydrogen in Power-to-X solutions is produced, together with oxygen, by the electrochemical process of water electrolysis, through the application of electrical energy from renewable sources. Oxygen is considered a by-product usually wasted to the atmosphere, however, it has a number of valuable uses, e.g., in metal, chemical and glass production and medical care.

There are three main production routes in water electrolysis in use or development.

Power-to-Hydrogen, the conversion of renewable electricity into green hydrogen, can be either the destination, with green hydrogen replacing fossil-based hydrogen in traditional feedstock applications or used in emerging energy applications, – or just the first step in the process. Produced hydrogen can act as a building block for a variety of products and product classes as well as applications including, among others: 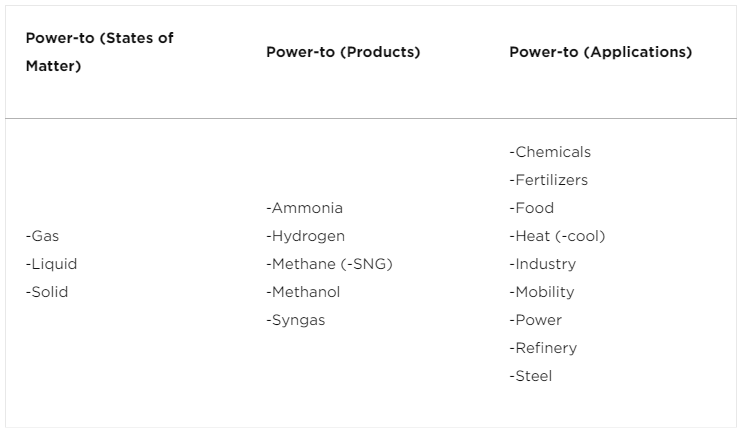 Power-to-X can, importantly, integrate various decarbonization technologies. In certain pathways, hydrogen can be combined with captured carbon dioxide. As an example, Power-to-Methane combines green hydrogen with carbon dioxide to produce methane with a methanation reaction, such as the Sabatier reaction or biological methanation.

According to the European Commission’s Vision for a Clean Planet by 2050, ‘The most important single driver for a decarbonized energy system is the growing role of electricity both in final energy demand and in the supply of alternative fuels, which will be mostly met by renewables, and in particular by wind and solar electricity’.

The significance of Power-to-X is in making possible the massive deployment and use of electricity from renewable sources through the connection of the power and gas infrastructure, or so-called sector coupling, which removes the traditional separation between the two sectors and allows the integration of the power system based on renewables with the energy-use sectors (industrial, buildings, transport). It also increases flexibility and efficiency of the energy system and enables cutting emissions in hard-to-abate applications, a vital prerequisite for achieving a zero-carbon economy by 2050.

In 2020–2021, the European Commission’s stimulus measures, such as the introduction of the EU hydrogen and industrial strategies, announcement of national IPCEI (Important Project of Common European Interest) calls and establishment of dedicated funds and alliances, resulted in booming announcements of projects in Europe and beyond. Global players along the entire energy supply chain joined the move under the pressure of growing demand for greener products, tightening regulations of carbon emission in Europe and shifting focus of funding organizations toward sustainable investments.

With Power-to-X at heart, project models are built around commercial availability of renewable power and accessibility of infrastructure, customer preferences for the type and location of the ‘X’ component, as well as legislative frameworks and governmental incentives.

Based on availability and capacity of renewable power generation, the key observed types of business models include:

Depending on the customer’s preferences for the type and location of the ‘X’ component, the project model may combine different technologies of green hydrogen production, its conversion to transportable forms as well as distribution and storage of hydrogen and hydrogen derivatives complemented by technologies enabling the product’s application, including fuel cells, combustion and use as a feedstock.

According to the observation of ongoing projects, among the leading technologies enabling hydrogen transportation, storage and industrial application, there are ammonia, liquefied organic hydrogen carriers (LOHC), e-methanol and hydrogen liquefaction, each of them having specific pros and cons.

An increasing number of hydrogen technology providers are developing and licensing hydrogen storage and transportation solutions, including entire plants, synthesis units, catalysts as well as loading and release infrastructure to provide sufficient hydrogen supply. Observed are partnerships of world-class technology providers with start-ups and local technology firms in licensing processes aimed at expanding business and market presence and involvement in large-scale industrial projects.

Depending on the specific place in the overall value chain, the projects are developed around three main types of hydrogen clusters:

By scale, industrial application and geographical coverage, there may be distinguished different types of projects: local, regional/ sectoral, international/ cross continental with the project scale varying from below one megawatt to dozens of gigawatts.

Sophisticated project models including a combination of different technologies – quite often having different levels of maturity – bring additional complexity to project planning, funding and execution. Therefore, a limited number of projects are developed by a single company, while the majority of observed projects are implemented by consortia of partners united to share project risks and secure funding from a combination of public and private sources. Moreover, due to technological and financial uncertainty, projects may evolve with changes of partners and technological concepts or becoming part of larger initiatives to combine different stages of the overall value chain.

What’s in it for Central and Eastern Europe?

In Central and Eastern Europe, interest in Power-to-X and Energy Transition technologies is on the rise, supported by the political and business commitment, which is shaping the investment trends. In 2021, some countries of Central and Eastern Europe are demonstrating an emerging trend of business case development testing the options and carving out a niche in the new low carbon economy.

Technologies and best practices applied to projects observed in the CEE region are mainly taken from countries in Northwest Europe (NWE) led by Germany and the Netherlands, which are interested to scale up technologies and create a hydrogen production hub to utilize favorable economic conditions and commercially available renewable capacity of the region.

While Poland, Romania and the Czech Republic are leading the Energy Transition move in the EU by number and scale of announced projects, Ukraine is among the European Union’s priority partners for the Hydrogen Strategy implementation with a special place in a value chain framed by the ‘2×40 GW Green Hydrogen’ initiative introduced by the European industry association Hydrogen Europe in 2020.

We, at Bilfinger Tebodin, have been experienced in the Energy Transition technology mix in different global and regional markets, helping our clients turn the challenges of the Energy Transition into business opportunities. Our next publication will cover the topic of the hydrogen project road mapping and strategies at each stage of a project’s planning and implementation. 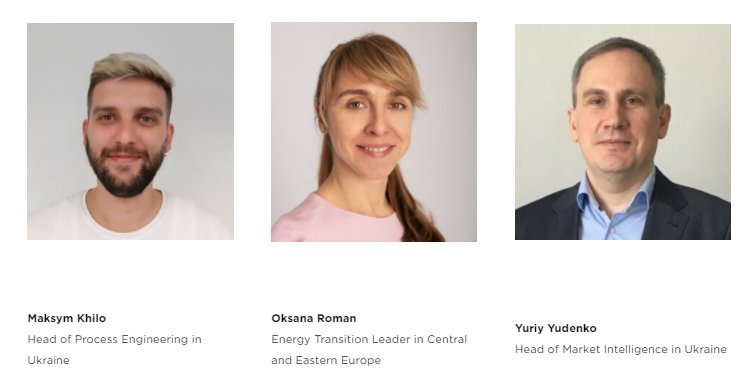 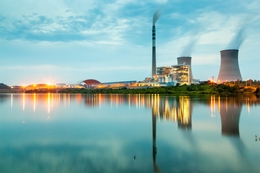 This article was originally published in European Business Association magazine.