Petrochem, a Dutch magazine, published an article about the neccessity for the industry to bring their maintenance stops forward during coronavirus situation. Wouter van Gerwen, Bilfinger Tebodin Business developer, shared his position about this possibility.

Empty schools offer an ideal opportunity for major maintenance, Koninklijke OnderhoudNL, a Dutch entrepreneurial organization for specialists, recently stated. ProRail, a Dutch organization responsible for the national railway network infrastructure, replaces 7.3 kilometers of rails in the Schiphol tunnel early, now that fewer trains are running. And Max Verstappen immediately dives into the pits when a safety car is driving. Is it not better for the industry to bring their maintenance stops forward during corona?

That is the suggestion of Wouter van Gerwen from Bilfinger Tebodin, following a blog about maintenance in times of corona. Van Gerwen: ‘The paradox is that especially now a stop produces the least lost turnover and is therefore the cheapest. Max also changes tires when there is a pace car on the track.’ An interesting thought in itself. Especially when you consider that several factory owners are currently considering postponing their scheduled maintenance stops. In fact, Gunvor has now stopped preparations for the turnaround of its Rotterdam refinery. Mainly under pressure from the staff according to their communications. They did not feel safe enough to start the stop. So maybe a different story.

It can especially be economically attractive for the oil industry to bring forward planned stops. The demand for fuels has plummeted, causing the storage tanks to fill up. Production will therefore be irrevocably reduced. And because there is currently no money to be made with it, an early maintenance shutdown is interesting for economic reasons. However, ethics require something different. We must avoid risks. And during maintenance stops, hundreds of extra people often walk around a site. However, this too is not entirely black and white. If in a while large amounts of postponed maintenance stops ask for priority, how big will the pressure on the job market get? And are the safety and integrity of installations not compromised? Are no human lives at risk?

'If in a while large amounts of postponed maintenance stops ask for priority, how big will the pressure on the job market get?'

A meter and a half distance

According to inspector Gerlof Stijnstra of Bureau Veritas, there are a number of practical obstacles. ‘In Formula 1, they take into account throughout the race that the safety car can enter the track and that in that case the right time comes to change tires, which are also available throughout the race. A maintenance shutdown is preceded by years of planning for people, resources and equipment. If you want to bring a stop forward, where are you going to get a six hundred ton crane from that you need to reserve at least a year in advance? And where do you get parts from if the factories that produce them are closed because of the corona crisis? Where do you get between two to three thousand people who know what to do? And then those involved must also adhere to the guidelines, such as a meter and a half distance. Ever stood on a landing of a tower with a manhole guard? The platform is no larger than one and a half square meters. Impressive to keep a meter and a half distance in that case.

Van Gerwen understands the comment made by Stijnstra very well, but would also like to shed another light on the issue. ‘Think about it: that crane is available because stops are postponed. The distance of one and a half meters is made possible by building scaffolding for this purpose. Two thousand men? Definitely not: small groups. The stop can take longer because production is almost stopped. And yes: you have to go through the whole preparation again and consider it against the renewed criteria.’ For example, he sees possibilities to break up the stops: ‘Short subprojects, not everything at once, always finish. Clear milestones.’ He also sees many opportunities to build the parts to be replaced in modules outside the site, so that large parts of a factory can be replaced at once. This may shorten the time in which the installation really shuts down and, moreover, hundreds or even thousands of people do not have to come to a factory site at the same time.

Gerlof Strijnstra is not convinced yet, but he likes to debate Van Gerwen. He therefore invites him: ‘When this crisis is over, I would like to take him along in a turnaround to show how it is in practice. Last week I experienced that two contractors walked shoulder to shoulder and entered the gate. The security guard pointed them to the meter and a half measure. They did not look up or down, but I am not surprised if you do not read or speak Dutch. It is also very annoying if the materials you need, such as valves, are still somewhere in China or Italy.

The situation in the chemical and energy sector is currently different from that in the oil sector. Demand for chemicals and energy is affected by the corona crisis, but not as rigorous as the oil sector. In fact, BASF Antwerp even saw a spike in demand for its products because various customers also hoarded. And it differs per product. Demand is rising for ingredients for sanitary products, while demand for building materials is declining. It becomes precarious if many refineries have to stop their activities due to the oversupply and flooding of tanks. After all, many chemical factories in Rotterdam, Antwerp and Geleen, for example, depend on the oil industry. That may be a completely different puzzle. 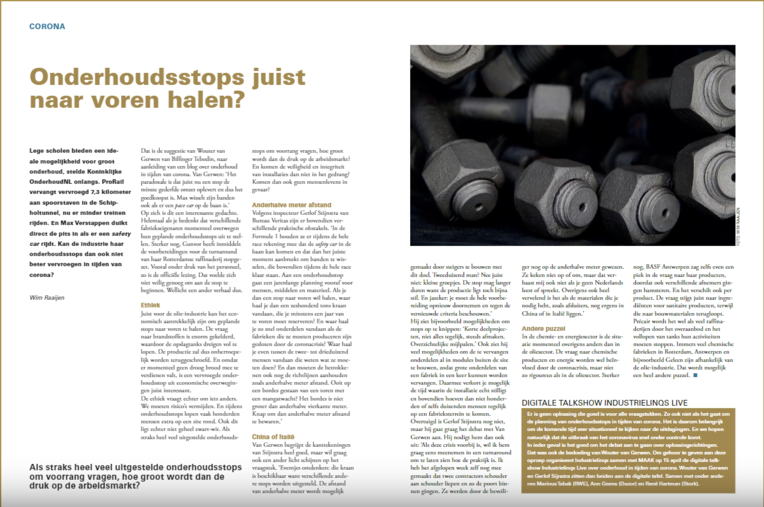