Boosting LNG as a transportation fuel

Gate Terminal is building a LNG break bulk terminal as an addition to its main LNG terminal in Rotterdam, the Netherlands. With Shell as its launching customer, the new terminal is expected to boost the use of LNG as a transportation fuel in Northwest Europe.

LNG (Liquefied Natural Gas) needs 600 times less storage space than natural gas, making it much more economical in terms of transportation. Gate terminal, a joint venture of Gasunie and Vopak, is located on the Maasvlakte in Rotterdam and started operations in September 2011. It receives, stores, and regasifies LNG before feeding it into the gas grid.

Tebodin was responsible for the conceptual design, technical studies and functional specifications for the Engineering, Procurement and Construction (EPC) tender package of the Gate regasification terminal. The new LNG Break Bulk terminal Rotterdam (LBBR) will be constructed next to the main terminal and connected to it by pipeline. Tebodin executed the basic and detailed design for the LNG tank truck loading station, as well as the basic design for the LBBR as a whole.

Break bulk terminals break up the large LNG shipments into manageable quantities for distribution and use as fuel for ships and trucks. The Dutch government and the European Union encourage the development of LNG as a transportation fuel. Stringent new emission regulations (SECA) were introduced for the marine sector in the North Sea. The Baltic Sea will follow in 2015. Barges, coasters, ferries, as well as heavy trucks can reduce their carbon dioxide, nitrogen oxide, sulphur, and particle emissions by using LNG as a fuel.

Gate Terminal successfully launched the tank truck loading station, with an annual capacity of 5,000 trucks, in January 2014. The basic design for the LBBR paved the way for the further elaboration and construction of the new facility in the port of Rotterdam. From the first half of 2016, inland barges and other small tankers will be able to supply LNG to bunker stations as far afield as Scandinavia and the Baltic countries, as well as stations along the Rhine, Main and Danube rivers in Central Europe. 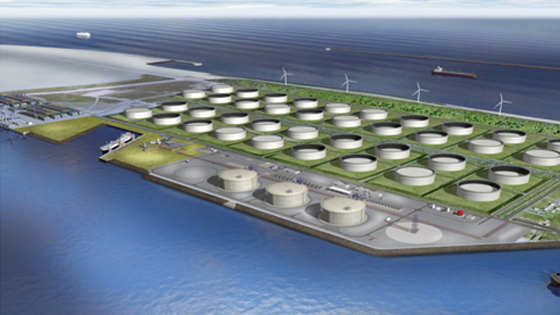