Bilfinger Magazine - CEO of the Port of Rotterdam: "Rotterdam must become the world’s most sustainable port"

Being the most sustainable port in the world. According to Allard Castelein, it is a business case that will be of great benefit to the companies in the Rotterdam port area and to Dutch society.

The energy transition is out of the idea phase. Now it’s a work in progress.

For several years the Rotterdam Port Authority, under the leadership of CEO Allard Castelein, has been focusing more on social impact than on transshipment volume. According to the port’s top executive, this is the right choice for the future. "About seven years ago I told the companies in the Rotterdam port area: we want to contribute to achieving the climate targets. We will not do that by asking you to turn off the lights and leave. No, we will help you to transition to climate-neutral production by 2050 in a profitable way. That way we are working in a smart and sustainable manner and volume will naturally follow."

In Castelein’s opinion, this year is a crucial year in Rotterdam’s energy and raw materials transition. "Significant decisions are being made. For instance, about Porthos, which will be the largest carbon capture, transport and storage system in the world. And as the Rotterdam Port Authority, we want to build a hydrogen backbone - the first hydrogen backbone in a port industrial area. A hydrogen plant planned by Shell on the Second Maasvlakte is also a major expected investment. Together with a group of companies and other organizations, we are advocating for an additional 2GW of offshore power to be landed onshore as well. Large investments in biofuels and reuse of waste heat are also to be expected."

Castelein feels that these types of investments should help strengthen Rotterdam’s role as Europe’s leading energy port because, while the port and industrial sector still run on fossil oil and gas today, soon green hydrogen will be the new oil and gas. However, enough green hydrogen must be available. Producing green hydrogen requires, amongst other things, large-scale production of electricity using North Sea wind, in conjunction with several electrolysis plants, but this will soon leave us far from being able to meet all demands. Castelein: "To strengthen our position as the number one energy port, we therefore also want to import green hydrogen from other areas. We are currently exploring the possibilities to that end with other countries such as Portugal, Morocco, Chile, Uruguay and even Australia. And we are also looking at green hydrogen form Iceland made with hydroelectricity."

Therefore, the Port Authority of Rotterdam assesses the future large-scale deployment of green hydrogen as a sure thing. Yet Castelein also takes into account unexpected opportunities and new technologies. "A lot can and will happen between now and 2050. Not all projects will succeed, and not all technologies we need for carbon-neutral production are presently available or proven. Shell and Dow are currently working on the first electric ethylene steam crackers. Currently there are no electric crackers that can reach such high temperatures - between 800 and 1,000 degrees Celsius. My point is that we are well on our way, but there are also many elements that still need to be developed. The purpose of carbon-neutral production is clear, but the way there will surely present us with several issues we need to resolve. We have to be honest about that: as of yet we don't possess all the answers.

In order to achieve the aforementioned climate-neutral production by 2050, the Port Authority of Rotterdam, together with the business community, governments and NGO's, laid down its strategy in the report "In three steps to a sustainable industry cluster". "The first step in this is greater energy efficiency, developing infrastructure and capturing and storing of CO2," says Castelein. "Subsequently the cluster works towards a new energy system using hydrogen and electrification. During the third step the raw material and fuel system will be replaced by making production circular."

In terms of steps one and two, Rotterdam is well on its way. Castelein: "There are a lot of sustainability initiatives from the industrial sector. Earlier I mentioned Shell, which wants to build a large electrolysis plant on the Second Maasvlakte. BP and Nouryon want to collectively realize Europe’s largest hydrogen plant in Rotterdam. During the second half of 2021 we will make our investment decision on the hydrogen backbone, which can supply green hydrogen to the entire port area. Subsequently, we want to extend the hydrogen backbone to the Chemelot industrial area in Limburg and the industry sector in North Rhine-Westphalia. Also consider the new investment envisioned by Neste in expanding biofuel production capacity. It is proof we are out of the idea phase; the energy transition is now a work in progress."

In the realization of transition plans, Castelein finds key supporters on his side. The industry sector is on board, and so are interest groups, suppliers, energy producers, grid operators and various governments. But what disappoints him - and many other entrepreneurs in the port area - is the level of ambition of the government. "You have to dare to think big," he says. "With the current mindset we cannot achieve our hydrogen ambitions. The national government must provide scope for the industry to achieve our high ambitions. By this I mean environmental space (nitrogen!), but above all financial support for those things we as a society consider important: offshore wind energy and large-scale production of green hydrogen. I wish the Dutch national government would adopt the level of ambition of the business community. In order to strengthen our international position. France and Germany stimulate their hydrogen initiatives with seven to nine billion euros a year; the Netherlands is willing to pay 35 million euros." With a sense of understatement: "That is not the level of ambition I suggest."

Although the government needs to step up its game, Castelein remains optimistic about the future of the chemical industry in the Rotterdam port area. "Chemical products are found all over and the demand is only increasing. After all, the industrial sector creates products that are good for society. Think of all the components of your computer or smartphone, as well as medical equipment. Just for comparison, take a hospital photo of an operating room or intensive care unit from the 1950s and hold it next to a photo of today's situation and you will see what I mean: all the equipment that has been added since is made from products we produce in the chemical industry. We really must embrace the industrial sector as a valuable provider of products for everyday life, as well as part of the solution rather than a problem. Every single day we work hard towards new production methods that are future-proof. In thirty years the industry sector in Rotterdam will look the same on the outside, but on the inside it will be drastically different. Compare it with an electric car: it looks exactly the same as a car on fossil fuel and you can do the same with it, but the technology is different, and emission-free.

As far as Castelein is concerned, the optimistic story of the chemical industry in transition should be told more often. "The industrial sector is an intrinsic part of our society. Communication about the transition story, such as through this Bilfinger Magazine, plays a big role in increasing awareness about it. I think it is relevant that there are parties like Bilfinger in our Rotterdam port complex who tell this story, thereby reaching decision makers in the port, the industrial sector, politics and suppliers. The positive story of what we are doing here in the Rotterdam port area can have a rippling effect so that more and more people will support our goals and want to join us in achieving them." 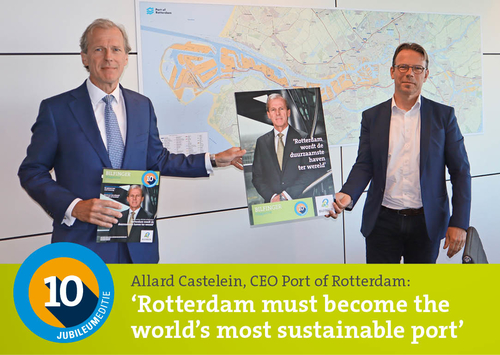 Click here to read the Bilfinger Magazine in Dutch. 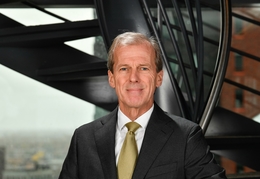 Allard Castelein (62) is president and CEO of the Port Authority of Rotterdam. Before taking the CEO position at the Port of Rotterdam in 2014, he worked at Shell for 27 years. There he held a number of international positions, later advancing to commercial manager and vice president of Environment. He has felt very much at home in the Rotterdam port area for seven years now. "Many people perceive the port as a traditional environment. In reality it is an amazingly innovative and incredibly challenging field of work; there is a tremendous amount happening."