Recently, Total held an opening ceremony for their new lubricants plant in the Kaluga region in Russia. The French oil & gas company has realized the plant to produce, store and ship motor oil and lubricants, based on a $ 50 million investment.

Bilfinger Tebodin provided Project Management Consultancy (PMC) services: checking the detail design and giving assistance in the commissioning. The contractual relation with Total will be continued for engineering services on this facility.

The ceremony was attended by Kaluga Governor Anatoly Artamonov. In his speech, Total’s President Patrick Pouyanne thanked the entire team consisting of various companies. ‘The team completed the factory in time, within budget and without any accidents.’

The developed automobile and railway infrastructure of the plant will make it possible to ship lubricants to a number of export markets, such as Central Asia and Belarus.

The plant will produce oil for cars and trucks, and lubricants for off-road vehicles. Located on 7 hectares in the Vorsino industrial park, the plant has capacity to produce from 40,000 up to 75,000 tons of production per year. The project also includes the building of a tank farm with capacity of 8,000 m3 and a warehouse that is supposed to become a logistics hub. There are also plans to run a rail line to the plant. 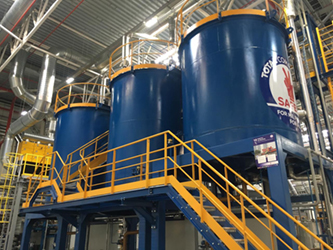